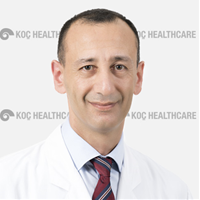 Prof. Mert Erkan, M. D. was born in 1970 in Istanbul. After finishing high school in Dost College in 1988, he graduated from Istanbul Faculty of Medicine of the Istanbul University in 1995. He finished his residency at the Department of Surgery of the same university in 2001 and worked there as a consultant surgeon for two years. Between 2003-2007 he commenced postdoctoral research at the European Pancreas Center in molecular biology and achieved his second doctoral degree with summa cum laude (The influence of tumor modulated microenvironment on pancreatic cancer behavior) from the University of Heidelberg in Germany. In 2007 he moved to the department of surgery of the Technical University of Munich. He completed his sub-branch specialization in Digestive surgery in 2010 and became a consultant surgeon. He received his Associate Professor degree in Surgery in 2011. He became the head of Pancreatic Surgery of the Technical University of Munich in 2013. Since October 2014, he is working at the Department of Surgery of the Koç School of Medicine.