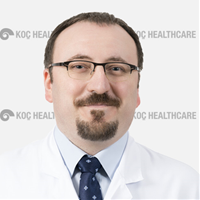 Murat Can Kiremit was born in 1977 in Istanbul. After finishing Cağaloğlu Anatolian High School, he graduated from Istanbul University Istanbul Faculty of Medicine in 2000. He completed his residency in Şişli Etfal Education and Research Hospital in 2006. During this period he worked as a visiting fellow in the Charité University Hospital of Berlin focusing on laparoscopic surgery. He completed his military duty in Golcuk Military Hospital and he worked in Erzurum Palandöken State Hospital for the obligatory service of the Ministry of Health. Thereafter, he started to work in Istanbul Medipol University Hospital in 2012 and became an Assistant Professor in 2014. He worked in Heidelberg University Heilbronn Clinic as a fellow in robotic surgery in 2014. Urinary tract stone disease, male infertility and endourology are his main fields of interest. He is working in Koç University Hospital since November 2015.