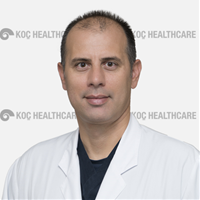 He graduated from Istanbul University Cerrahpaşa School of Medicine in 1991. He completed his compulsory medical service at Adıyaman-Kahta State Hospital in 1993. He worked as Emergency Service Physician and Hemodialysis Physician in Çanakkale-Can State Hospital between 1993-1998. He completed his residency program in Taksim İlkyardım Hospital in Istanbul between 1999- 2003. He attended to hemodialysis education program in Tulane University Medical School of New Orleans between Oct 1998- Jan 1999. He worked in Emergency depatment of VKV American Hospital from July 2003 to Jan 2015. He is still working as deputy medical director and check-up clinic physician at Koç University Hospital since January 2015.