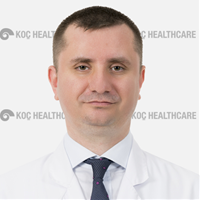 Dr. Caner Gunerbuyuk, M.D. was born in 1976, in Kırklareli. After finishing Uskudar Anatolian High School in 1994, he graduated from Istanbul University, Istanbul Faculty of Medicine in 2000. Between 2001-2002 he worked as a resident at Trakya University Faculty of Medicine, Department of Physiology. He finished his residency in Istanbul University Istanbul Faculty of Medicine, Department of Orthopaedics and Traumatology in 2008. Between 2008-2009, he completed his compulsory military service at Military Hospital in Erzincan. After that, he completed his compulsory health service in Şanlıurfa at Akçakale State Hospital between 2009-2010. Between 2010-2014 he worked as a staff at Private 29 Mayıs Hospital in Istanbul. He worked at Acıbadem Beylikdüzü Surgical Medical Centre and after that at Bakırköy Private Çamlık Hospital in 2014. He is working in Koç University Hospital since September 2014.