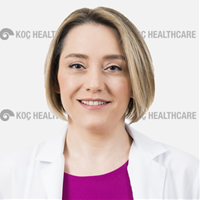 Özgür Öztop Çakmak, M.D. was born in 1975 in Amasya. After finishing her high school in Samsun Anatolian High School, she graduated from Ankara University Faculty of Medicine in 2000. Between 2002-2004 she worked in International Hospital as a medical practitioner. Between 2004-2005 she worked as a resident in Istanbul University Cerrahpaşa Medical Faculty, Department of Biochemistry. She finished her residency in Göztepe Training and Research Hospital in 2011. During her residency, she attended an exchange programme in Barcelona Sant Pau Hospital, Movement Disorders Unit in 2010 with the grant of European Federation of Neurologic Society (EFNS). She worked in Karabük University Training and Research Hospital between 2011-2014 for her obligatory medical service. She began her Master of Science in Electroneurophysiology in İstanbul University in 2014. She is working in Koç University Hospital since October 2014.