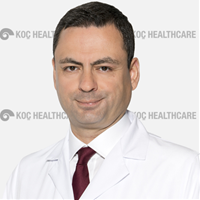 Professor Kubilay Aydın was born in Trabzon, 1969. He compleled the medicine education in 1993, radiology residency in 1998 at the Hacettepe University. He worked at the Neuroradiology Department of Istanbul Medical School between 2000-2005. He worked as an associate professor between 2005-2011. In 2011, Dr.Aydin got a degree of clinical professor of neuroradiology. He worked as the chief of diagnositc and interventional neuroradiology department of Istanbul Medical Facult between 2011 and 2015. Professor Kubilay Aydın got the Disntinguished Young Sciencist Award of Turkish Academy of Science in 2007, Prof. Meliah Terzioğlu Science Award in 2008 and Medicine science Award of the Scientific and Technological Research Counsil of Turkey (TUBITAK) Award in 2009. Professor Aydin has been working at the Interventional Radiology Department of Koç University Hospital since 2015.