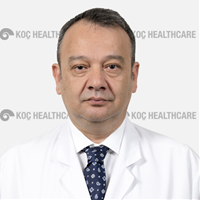 Assoc. Professor Dr. B. Tunç Öktenoğlu was born in Antalya in 1964. After graduating from Tarsus American High School in 1982 he graduated from Istanbul University School of Medicine in 1988. In the years 1988 - 1990 he completed his compulsory service as a general practitioner at Adana State Hospital Emergency Department. In the years 1992 - 1997 he specialized in Brain ad Nerve Surgery (Neurosurgery) at Marmara University. During this period he completed 4 year courses in the European Association of Neurological Surgeons. Again in 1996 he studied Gamma-Knife at Karolinska Institute in Sweden. After his residency, he studied Spine Biomechanics at New Mexico University from 1997 - 1999. Dr. Öktenoğlu whom received his title as associate professor in 2011, wrote in 48 refereed journals, 15 articles in domestic refereed journals, 3 chapters in international books and 14 chapters in domestic books. He has presented 111 papers amongst international and domestic scientific meetings. Dr. öktenoğlu has been working in American Hospital Neurosurgery since 1999.