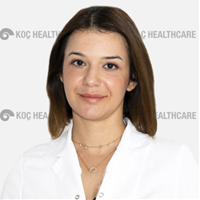 Dr. Seçil Vural was born in Kahraman Maraş in 1981. She graduated from Tarsus American College in 1999 and from Hacettepe University Faculty of Medicine in 2006. She completed her dermatology and venereology specialty training in Dermatology Department of Ankara University Faculty of Medicine between 2007-2012.  Between June 2012 and March 2014, she worked as a dermatology specialist at Adıyaman Besni State Hospital on the grounds of state obligatory service. Between March 2014 and January 2018, she worked as an instructor in Ankara University Department of Dermatology. She conducted research at Ludwig Maximilians University of Munich for two years between 2015 and 2018. Her main areas of interest are psoriasis, Behçet’s disease, skin tumors, hidradenitis suppurativa and genodermatoses.