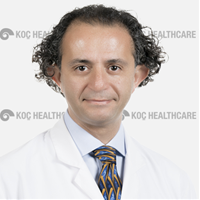 Professor of Orthopedics and Traumatology

Prof. Dr. Eftal Güdemez was born in 1970 in Gaziantep. He completed his primary and secondary education in the same city. Between 1987-1993 he studied medicine at Gazi University, Faculty of Medicine and between 1993-1998 the Ministry of Health Ankara Training and Research Hospital, Department of Orthopedics and Traumatology where he specialized.In 1995-1996, he completed his fellowship in handsurgery at the Department of Hand and Microsurgery at the American Hospital and between years1997-1998 he completed his fellowship in Microsurgery at the Department of Plastic and Reconstructive Surgery, The Cleveland Clinic Foundation, OH, in USA. Between 1999-2000 he completed his military service by working as a specialist in Orthopedics at Istanbul Haydarpasa Gulhane Military Medical Academy. Between 2000-2004 at Kirikkale University Faculty of Medicine, he worked as a faculty member in the Department of Orthopaedics and Traumatology and in 2004 became an associate professor. Since 2004, Prof. Dr. Güdemez has been carrying out the work of the American Hospital Hand and Microsurgery. In 2005, other work he carried out were for the American Society for Surgery of the Hand Traveling Fellowship Program, Hand Center of San Antonio, San Antonio, TX, Department of Hand Surgery, Mayo Clinic, Rochester, MN, and the Department of Plastic Surgery, Washington University, St. Louis, MO in USA. He is an active member of The Turkish Association of Orthopaedics and Traumatology,Turkish Society for Surgery of Hand and Upper Extremity,Turkish Society of Reconstructive Microsurgery,American Society for Surgery of the Hand (assh),Federation of National Associations of Orthopaedics and Traumatology europian (EFORT) and International Society of Orthopedic Surgery and Traumatology of (SICOT). He has nearly thirty papers published in international journals and up to forty notification of an international convention. He is the owner of European Association for Hand Surgery and The Federation of Diploma in Hand Surgery.