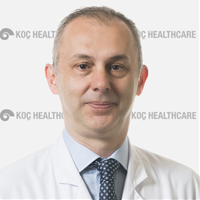 Professor of Ear Nose and Throat

Professor Sarp Saraç M.D. was born in Ankara in 1967. He graduated from Hacettepe University School of Medicine in 1991. In 1996 he completed his residency training in Department of Otolaryngology at Hacettepe University. Between 1996 -1998 he worked as a lecturer. Between 1998-2000 assistant professor and between 2000- 2006 he was an associate professor. From 2006 to 20012 he was working as a professor. In 2004 with a Scholarship from TUBITAK he was a visiting scholar in Massachusetts Eye and Ear Infirmary, researching “Long Term Results of the Malleus Flu stapedectomy” in Boston, USA. Between 2006- 2010 he served as the assistant dean at Hacettepe University School of Medicine and between 2010 to 2012 at Hacettepe University Faculty of Medicine he was the Dean of duty. Between 2012 to 2014 he was the chief of Otolaryngology Department at Ulus Liv Hospital. Since 2015 he has been working at the ENT department at the VKV Healthcare Institutions.