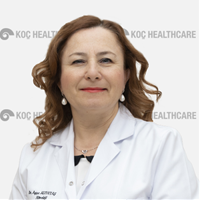 Ayşe Altıntaş has graduated from Aegean University Medical School in 1986. She has completed my residency in Neurology Department of the same university in 1992. During the residency period, she spent one year at Mayo Clinic, Rochester,MN as a “post-doctoral fellow in neuroimmunology”. She worked on the project about experimental model of multiple sclerosis and received “Eczacıbaşı Medical Award”. After completion of her obligatory service, She has started to work in Istanbul University, Cerrahpaşa Medical School Neurology Department in 1995 and became a Professor of Neurology in 2003. She worked in the same university until 16.5.2018.