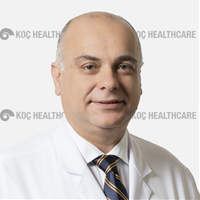 Professor of Anesthesiology and Reanimation

Prof. Dr. Ömür Erçelen was born in 1964 in Ankara. He graduted from Hacettepe University School of Medicine in 1987, where he also completed his residency. He continued to work at the University as Associate Professor between the years 1993 - 1997 and as the Director of the Pain Unit between the years 1995 - 1998. Prof. Dr. Erçelen has been working as the Chief of the American Hospital Pain Unit since 1998.