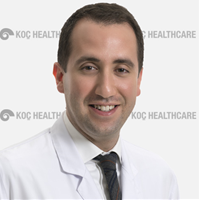 Dr. Ömer Acar was born in 1980. He graduated from TED Ankara College in 1996. He completed his medical training in the School of Medicine, Marmara University in the year of 2003. He worked as a resident in Urology at the Department of Urology, Istanbul Faculty of Medicine, Istanbul University between 2003 and 2008. In 2009, he worked in the transplantation unit of the Turkish Kidney Foundation Hospital. During the same year, he completed a short-term visiting fellowship programme in the Division of Urology, Albany Medical Center, NY, USA. In 2010, he worked for the Turkish Armed Forces. Then, he completed his obligatory service for the Ministry of Health which took 1.5 years and ended up in 2012. Between April 2012 and August 2014, he worked in the Urology Department of VKV American Hospital. Since September 2014, he has been working as a Urology Specialist in the Urology Department of Koç University Hospital.