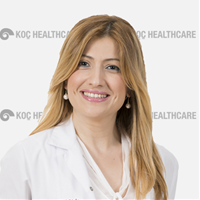 Dr. Yeliz Aydemir was born in 1982 in İstanbul. After finishing her high school in Üsküdar Science High School in 2000, she graduated from Kocaeli University Faculty of Medicine in 2006. She finished her residency in Trakya University İnternal Medicine in 2011. Between 2012-2013 she worked in Reyhanlı, city of Hatay for the public hospital. Between August 2013 - September 2014 she worked in Acıbadem Hospital in İstanbul. She is working in Koç University Hospital since October 2014.