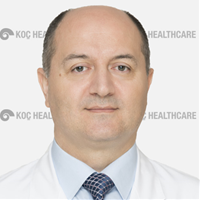 Dr. Ömer Yıldız, M. D. was born in 1968 in Bursa. After finishing his high school in Staatliches Mannheim Kolleg in 1995, he graduated from Ruprecht-Karls University (School of Medicine) in 2001. He started his residency in Herz- u. Diabeteszentrum, Bad Oeynhausen in 2001 and continued in Herzzentrum Ludwigshafen from 2003 until 2006 and then he finished his residency in Klinikum Uelzen Training Hospital for Internal Medicine and Cardiology in 2008 and worked there as a consultant cardiologist until 2009. He worked as an interventional cardiologist in Medical Park Göztepe Hospital from 2009 until 2010 and then he continued working as an interventional cardiologist in Florence Nightingale Hospital from 2010 until 2014. At the same time, he taught as an assistance Professor in the Bilim University between 2013 and 2014. Since July 2014, he is working as an interventional cardiologist in VKV Koç University Hospital and Amerikan Hospital.