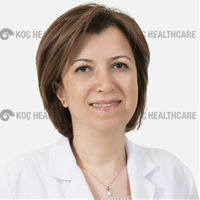 Prof. Olga Meltem Akay, M. D. was born in 1970 in Erzincan. After finishing her high school in Kdz. Ereğli Anatolian High School in 1988, she graduated from Hacettepe University Faculty of Medicine in 1995. She finished her internal medicine residency in 2002 and hematology sub-specialization in 2005 in Eskişehir Osmangazi University. In 2007, she worked at Duke University Hemostasis and Thrombosis Center in United States. She received her Associate Professor degree in Internal Medicine in 2010 and Professor degree in 2015. She is working in Koç University Hematology Department since February 2016.