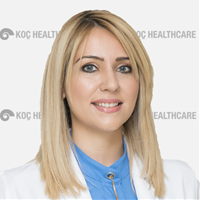 Gülru (Ulugerger) Avcı, M. D. was born in 1983 in Şanlıurfa. After finishing her high school in Ankara Arı Science School in 2001, she graduated from Hacettepe Faculty of Medicine in 2007. She finished her residency in Okmeydanı Training Hospital for İnternal Medicine in 2013. Between the years 2013-2014 she completed her compulsory state service working in the district of Sivas Yıldızeli. She is working in Koc University Hospital since December 2014.