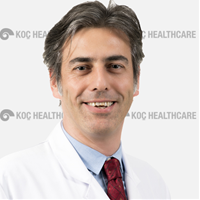 Mehmet Gökhan Gönenli , M. D. was born in 1976 in İstanbul. After finishing Kadikoy Anatolian High School in 1994, he graduated from I.U. Istanbul Cerrahpasa Faculty of Medicine in 2000. He finished his residency training in Marmara University Internal Medicine Department in 2008. He completed his compulsory state service in Agri Patnos State Hospital between 2009 and 2010. After finishing his military service as an internist in Canakkale Military Hospital he started to work in Istanbul Medeniyet University Goztepe Training and Research Hospital in 2011. Between 2012 and 2016, he founded and worked in the Internal Medicine Intensive Care Unit in the same hospital. He is working in Koc University since February 2016.