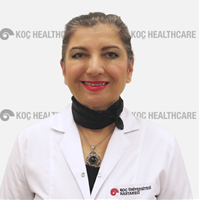 Prof. Dr. Feriha Özer completed her residency training at Gazi University Faculty of Neurology Department and later served as a chief assistant at Ankara Numune Training and Research Hospital and Bakırköy Mental and Neurological Disorders Training and Research Hospital. She founded the Polyclinic of Parkinson and Movement Disorders at Bakırköy Mental and Neurological Disorders Training and Research Hospital. In 1998, she became the chief of Neurology Clinic of Haseki Training and Research Hospital. She founded Parkinson and Motion Disorders Polyclinic and other policlinics at the same hospital. In 2012, she began to work as a professor at Ordu University Faculty of Medicine Neurology Department and became the chief of the department. She worked at Medipol University between December 2014 and 2017. In December 2017, she began to work at Koç University Hospital. She supervised many thesis on Parkinson's Disease, Tremor, Wilson's disease, Cerebrovascular Diseases, Diabetic Polyneuropathy and Headache. She has been a vice president and member of the board of directors of the Parkinson's Disease Association for many years. She was involved in the organization of scientific meetings and patient meetings. There are 40 publications in international journals, 150 publications in national journals, and book chapters on Parkinson's disease, Tremor, Wilson's disease and Diabetic Polyneuropathy.