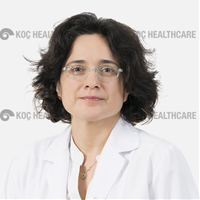 Prof. Dr. Cansın Saçkesen, M. D. was born in 1969 in Berlin. After finishing her high school in Saint-Benoit in 1986, she graduated from Istanbul University, Istanbul Faculty of Medicine in 1994. She finished her residency of Pediatrics in Hacettepe University School of Medicine in 2000 and then she accomplished Pediatric Allergy fellowship in Hacettepe University Division of Pediatric Allergy and Asthma in 2003. She studied as a research fellow on the laboratory methods to investigate immunologic mechanisms of allergic diseases in Swiss Institute of Allergic Diseases and Asthma, Davos Switzerland in 2004. While she continued to work in Hacettepe University she received her Associate Professor degree in Pediatrics in 2005 and Professor degree in 2012. She studied as a visiting scientist on food allergy in Mount Sinai Hospital, Division of Pediatrics in 2014-2015. From April 2015 she began working as a Pediatric Allergist at Koç University Hospital.