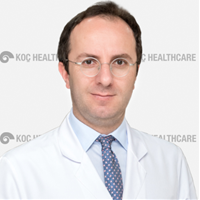 Bilgin Sait, M.D., was born in Gjilan, Kosovo, in 1977. After completing his high school education in Pristina, he won the Turkish Republic scholarship and qualified for Ege University Faculty of Medicine (1998-2004). He completed his residency at the department of Internal Medicine at Hacettepe University Faculty of Medicine (2007-2012). Between the years 2012 and 2015, he worked as the consultant of Cardiovascular Surgery and Organ Transplantation departments and also at the Check-up department of Memorial Hospital Ataşehir –his first involvement in a private hospital. During this term, he acted as the advisor to Memorial Healthcare Group for two years in order to enable the group’s venture into Balkan countries. Later between 2015 and 2018, he worked at Anadolu Medical Center as the Balkan Region Manager at the International Patients Unit and also as an internal medicine specialist. As of March 2018, he has been working at VKF American Hospital as the Medical Coordinator of the International Patient Programs and also as an internal medicine specialist. He speaks Albanian and Serbian.