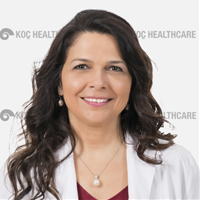 Prof. Tuğba Gürsoy, M.D. was born in 1971 in Ankara. After finishing her high school in TED Ankara College in 1988, she graduated from Hacettepe University Faculty of Medicine in 1994. She finished her Pediatrics residency in Dışkapı Children’s Education and Research Hospital in 2000 and worked there as a chief assisstant until 2003. Between 2003 and 2006 she completed her Neonatology Fellowship programme in Hacettepe University Department of Pediatrics Neonatology Unit. Between 2007 and 2013 she worked in Zeynep Kamil Maternity and Children’s Education and Research Hospital as attendee first, then as chief assisstant. She completed functional echocardiography training in USC University of Southern California Children’s Hospital Los Angeles in 2012. She received her Associate Professor degree in Pediatrics in January 2009. She is working in VKV Healthcare Institutions since January 2014.