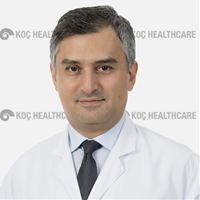 Dr. M. Şanser Ateş was born in 1968 in Ankara. After finishing his high school in Ankara Atatürk Lisesi in 1985, he graduated from Hacettepe University Faculty of Medicine in 1992. He completed his residency in Hacettepe University Faculty of Medicine Thoracic and Cardiovascular Surgery Department in between 1994-2000 years. He had worked in Alkan Hospital between 2001-2002 and in Ankara Güven Hospital with Dr. Haldun Karagöz and his team from 2002 to 2014. He is working in Koç University Hospital Cardiovascular Surgery Department since January 2015.