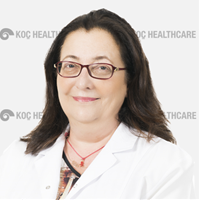 Prof. Hülya Kayserili Karabey, MD, PhD. was born in 1960 in İstanbul. After completing her studies at American Academy for Girls in 1978, she graduated from Istanbul University, Faculty of Medicine at 1984. She had training of Family Medicine specialization at Sişli Etfal Hospital and Bakırköy Training Hospital for Psychiatric and Neurological Diseases between 1988- 1991. She continued her studies towards PhD degree at Child Health Institute & Health Sciences Institute of Istanbul University. She worked as a consultant at the Prenatal Diagnosis and Research Center of Istanbul University between 1992-2004 and became the chief of clinical genetics unit & pediatric genetics division of Medical Genetics Department, Istanbul Medical Faculty of Istanbul University at 2004-2015. She received Associate Professorship degree on Medical Genetics in November 2000, became professor at 2009. She is working at Medical Genetics Department of Koç University School of Medicine (KUSOM) since February 2015.