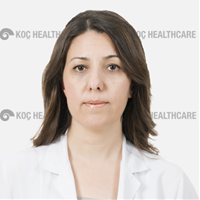 Medine Böge, M. D. was born in 1979 in Aksaray. After finishing her high school in Mersin Science School in 1999, she graduated from Ankara University Faculty of Medicine in 2005. She finished her residency in Hacettepe University, Department of Radiology between 2005-2010, then fullfilled her mandatory goverment service in Sakarya Obstetrics-Gynecology and Children’s Hospital. She is working in Koç University Hospital since Septmber 2014 .