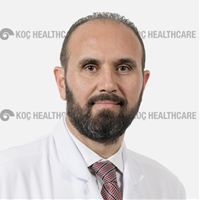 Professor of Orthopedics and Traumatology

Prof. Dr. Aykın Şimşek M. D. was born in 1964 in Ankara. After finishing his high school in TED Ankara College High School, Ankara in 1987, he graduated from Gazi University Medical Faculty, Ankara in 1987. He finished his residency in Gazi University Medical Faculty, Ankara in 1995 and worked there as a Assistant Professor in 1995. Between 1996-1997 he attended as a clinical fellow program Newcastle Upontyne University Department of Orthopedics in Newcastle UK. He received his Associate Professor degree in Orthopedics and Traumatology in 2000 and received his professor degree in 2005. He is working in VKV Amerikan Hospital and Koç University Medical Faculty Department of Orthopedics and Traumatology since 2014. He is mainly interested in hip and knee arthroplasty and management of the bone and soft tissue tumors.