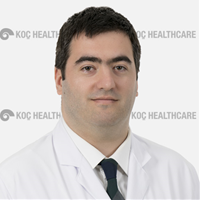 Suat Erus, M.D. was born in 1981 in İstanbul. After finishing her high school in Saint Benoît French in 2000, he graduated from Trakya University School of Medicine in 2006. He finished his residency in Istanbul University Istanbul (Çapa) School of Medicine in 2012. He attended to lung transplantation program at Medical University of Vienna as an observer in March 2012. He completed his compulsory medical service at Artvin State Hospital in 2014. He worked in VKV American Hospital from July 2014 to October 2014. He is working in Koç University Hospital since October 2014.