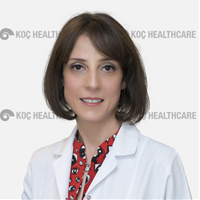 Banu Oflaz Sözmen, M.D. was born in Istanbul, Turkey in 1977. She graduated from Ankara Science High School in 1995 and Ankara University School of Medicine in Ankara, Turkey in 2001. She completed her pediatric residency training at Washington University in St. Louis/St. Louis Children’s Hospital in St. Louis, MO USA in 2006 and pediatric hematology oncology fellowship training at Memorial Sloan Kettering Cancer Center/ New York Presbyterian Hospital Cornell Medical College in New York, USA in 2009. She is American Board certified in Pediatrics and Pediatric Hematology-Oncology. She worked at Memorial Sloan Kettering Cancer Center in 2010. After returning to Turkey she completed her compulsory service for government as pediatric hematologist oncologist at Diyarbakır Children’s Hospital in Diyarbakır, Turkey between 2011 and 2013. She joined Koç University School of Medicine in 2014 and has been working at VKV Healthcare Institutions since then.