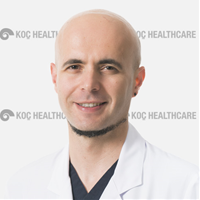 Sami Kaan Coşarcan, M. D. was born in 1977 in Elazığ. After finishing him high school in Antalya in 1996, he graduated from Uludağ University Faculty of Medicine in 2003. Between 2011-2012 he worked in Malatya State Hospital. Between 2012-2014 he worked in Private Medical Park Hospital in Bursa. He is working in VKV American Hospital and Koc University Hospital department of Anesthesiology and Reanimation since August 2014.