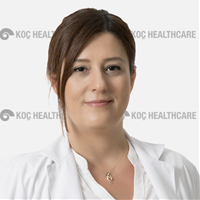 Özlem (Akıncı) Dikme, M. D. was born in 1980 in Burhaniye. After finishing her high school in Izmir Academy for Girls in 1997, she graduated from Ege University Faculty of Medicine in 2004. She finished her residency in Dokuz Eylul University Medicine Faculty, Department of Emergency Medicine in 2009. The scope of Public Service Requirement in 2010 she appointed to Erzurum Regional Training and Research Hospital Emergency Department, and in the same year she was appointed to Burdur State Hospital Emergency Department by reason of marriage. After working as an emergency physician in charge, between 2011-2014 she was began work in Istanbul as an emergency physician at Haseki Training and Research Hospital and Istanbul Training and Research Hospital. She is working as an instructor of Emergency Medicine Association of Turkey Ultrasonography Study Group since 2012 and serving Basic and Advanced Emergency Ultrasound Training in Istanbul. She is working in Koç University Hospital Emergency Department since December 2014.