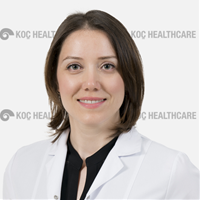 Eda Arş, M.D. was born in 1982 in İzmit. After finishing her high school in Neşet Yalçın High School in 2000, she graduated from Trakya University Faculty of Medicine in 2007.Between 2007-2009 she worked in Giresun-Dereli State Hospital Emergency Department. She finished her residency in Göztepe Training Hospital for Emergency in 2013 and worked in Düzce Atatürk State Hospital until 2014. She is working in Koc University Hospital since December 2014.