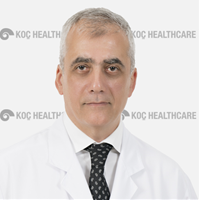 Benan N. Çağlayan, Prof. M.D. was born in 1959 in İstanbul. After Kalamış Private High School, he graduated from I.U. Istanbul Faculty of Medicine in 1982. He completed his Chest Diseases residency in İstanbul, Heybeliada Sanatorium Chest Diseases and Thoracic Surgery Center in 1988. Between 1988-1990 he worked at Erzurum Chest Diseases Hospital and Diyarbakır Military Hospital as a pulmonologist and returned to Heybeliada Sanatorium in 1990. He received his Associate Professor degree in 1997. In 1998 he started to work at Dr. Lütfi Kırdar Kartal Training and Research Hospital as Chief of Pulmonology Department and continued this job until 2015. He had been in LungenKlinik-Hemer and Thoraxklinik-Heidelberg to improve his experiences and skills on bronchoscopy, endobronchial ultrasonography and interventional pulmonology. He is working in Koç University Hospital and VKV Medamerikan Medical Center since November 2015 and he received his professor degree in 2016.