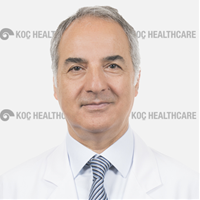 Burhan Ferhanoglu, M.D., was born in 1953 in Mardin. He graduated from Vefa High School in 1972 and from Istanbul University, School of Medicine in 1978. Dr. Ferhanoglu completed his residency at the Istanbul University School of Medicine, Department of Internal Medicine in 1982. He completed his hematology fellowship between 1986 and 1988 in Istanbul University, Cerrahpasa Medical Faculty and obtained Associate Professorship of Hematology in 1988. He participated in research projects in University of Texas – Health Science Center, Department of Hematology/Oncology between the years of 1990 and 1991. He worked in the Bone Marrow Transplantation unit of Fred Hutchinson Cancer Research Center at Seattle in 1992. He obtained his Professorship of Hematology in 1994. In 1998, he became the chief of Hematology Department of V.K.V. American Hospital. Currently, he is working at the Hematology Departments of American Hospital and Koç University Hospital.